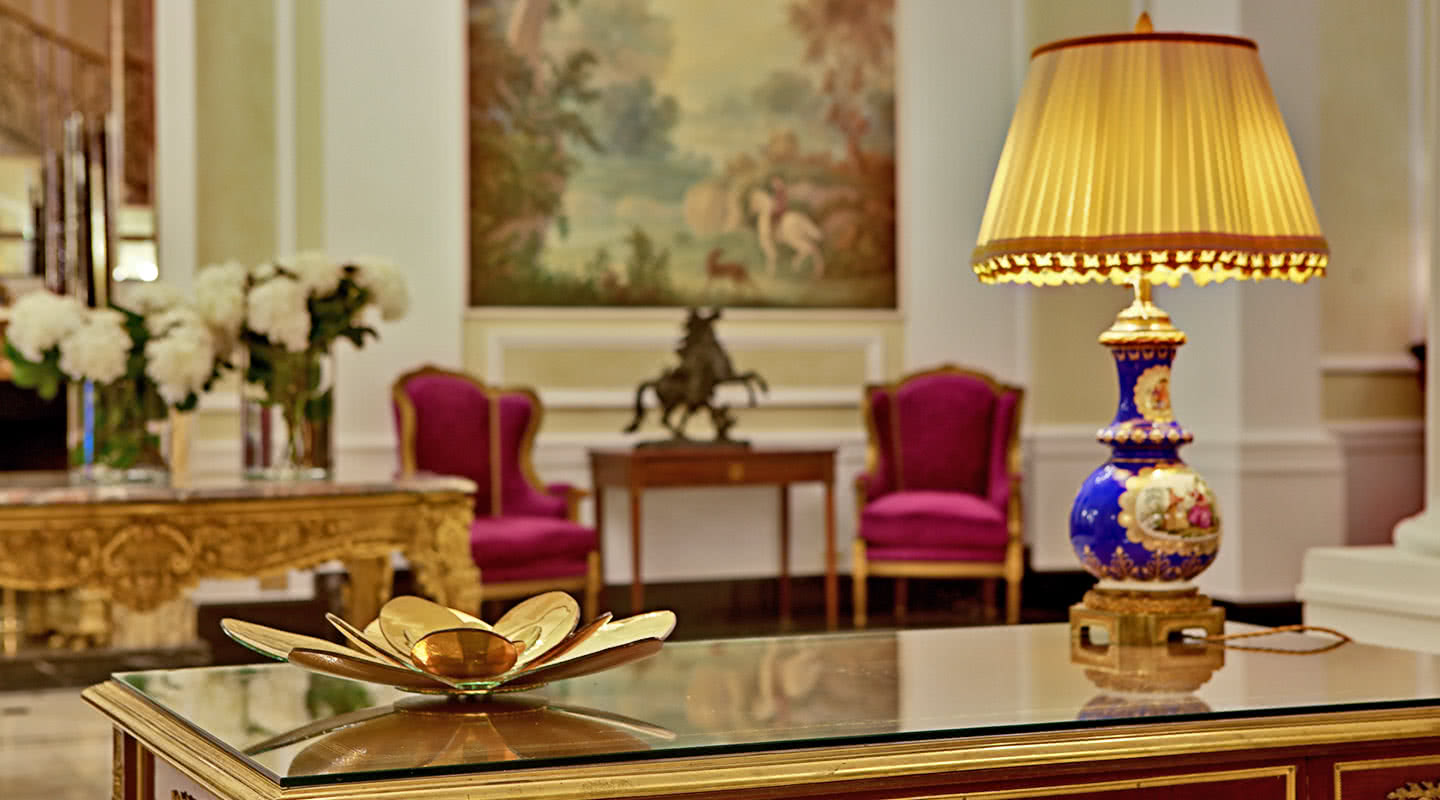 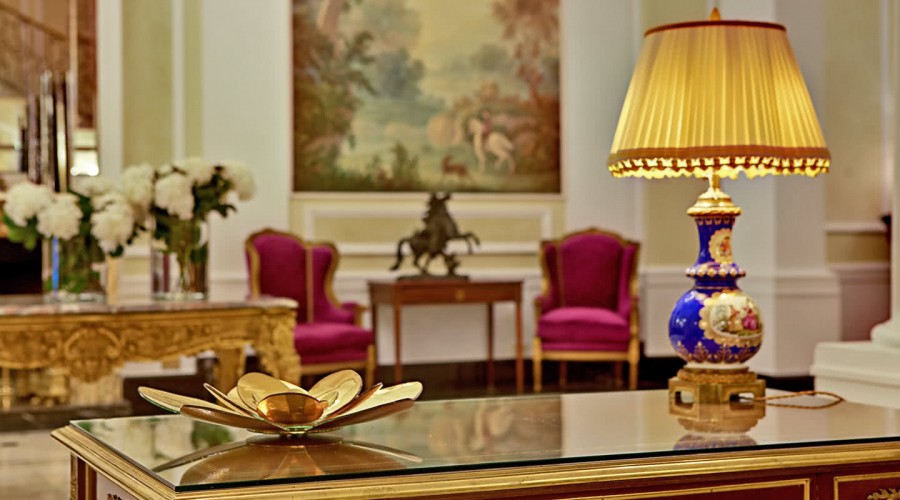 The Grand Hotel Majestic già Baglioni, the oldest and most prestigious hotel in Bologna, part of The Leading Hotels of the World since 1990 welcomes you to discover its palace, its features and the stunning city of Bologna the only one in the world with 33Km of Porticoes and the oldest University in Europe

The architect of the imposing structure was Alfonso Torreggiani who acted an order of Cardinal Prospero Lambertini, using 2.000 “scudi” (shields) which the Pope had bequeathed in 1738. The building was to be located on what was once the crossways of an ancient Roman road, and later, the site of the medieval mansions of Ariosti, Rustighelli and Arrigoni.

The new construction, designated to be the seat of an arch-episcopal seminary, was enriched according to the wishes of Cardinal Vincenzo Malvezzi who entrusted Francesco Tadolini with its care. The wide portico and a row of rooms above it were added, thus giving to the simple, harmonious and majestic facade. In 1911 the palace was converted into a Hotel, which, under various owners, continued to be used as such until as late as 1978

The imposing and magnificent building that, for a century, has housed one of the most beautiful hotels in Italy is located along the most representative street of the historic centre of Bologna and was built for a completely different purpose. In 1732, the Bolognese Cardinal Prospero Lambertini (who later became Pope Benedict XIV) ordered the building of a new Archdiocesan Seminary and to this end he purchased (the deed is dated June 1st, 1732) and demolished the front of the old Ariosti houses. The work was entrusted to the architect Alfonso Torreggiani and lasted for about two decades. In 1751 the seminarians could finally move into the new premises. 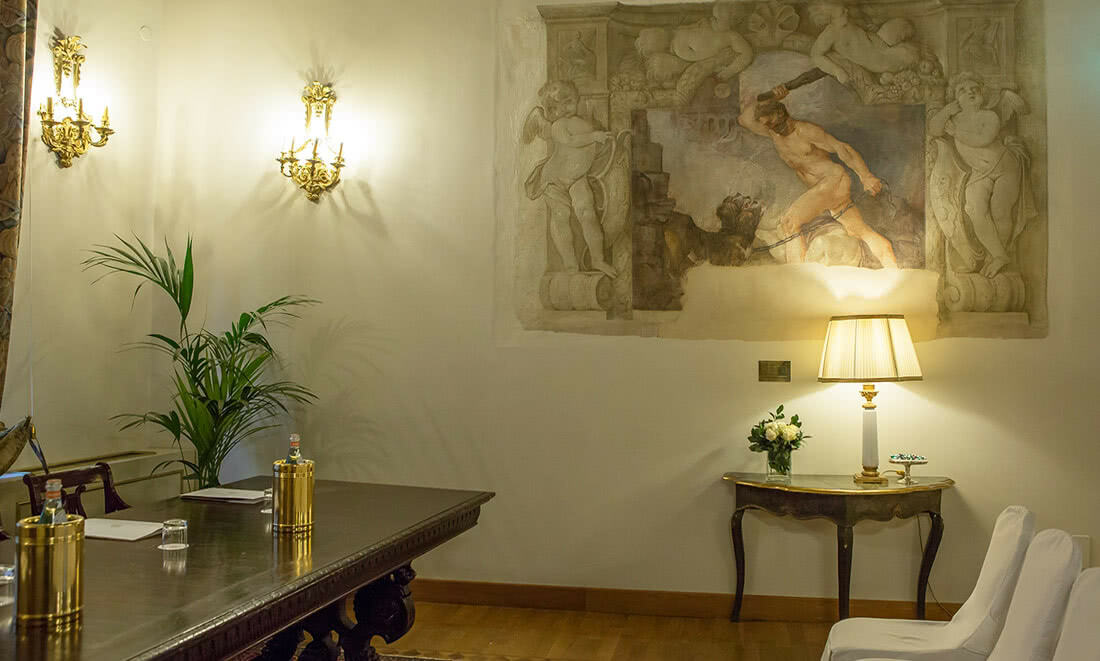 In 1772, Cardinal Vincenzo Malvezzi built the portico of 23 arches on the ground floor of the façade along via dell’Indipendenza, thus destroying some rooms of the seminary. The decision was made to make more usable space in front of the cathedral of San Pietro. The work was entrusted to architect Francesco Tadolini and completed in a year.

The architecture of the Grand Hotel is connected and merged into a single cluster with that of an older building, the elegant Palazzo Fava Ghisilardi, whose main entrance is now located in the adjacent via Manzoni. It was commissioned by Bartolomeo Ghisilardi and built between 1484 and 1491 on a design by Master Zilio Montanari and is considered one of the most illustrious Renaissance buildings in Bologna The edifice is currently part of a historical art itinerary created by Genus Bononiae - Carisbo Foundation, which aims to highlight the heritage and unique character of the city of Bologna

The building is located in one of the most interesting archaeological and architectural areas of the entire historic city center. It sits near the intersection of the two main axes of the Roman road system: the north-south cardo, today via dell’Indipendenza, and the east-west decumanus maximus, now via Rizzoli-Ugo Bassi, the urban section of the via Emilia (189 B.C.). A number of overlapping buildings alternate and mingle in its foundations starting from the early Middle Ages. In the basement of the Grand Hotel Majestic, a ten-meter section of road belonging to a minor decumanus can still be seen and is characterized by its excellent state of preservation and the opportunity to observe its layered composition In June 1909 the Curia sold the building of the Archdiocesan Seminary, which was then converted into a hotel by the engineer Gasperini. With its singular location and proximity to theaters and trendy venues of the time, the hotel soon became a destination for upper class tourism. A new floor would be raised in 1924. On the night of October 18th, 1944, in an attempt to destroy a Nazi commando located at the Grand Hotel Majestic già Baglioni, six members of the G.A.P. (Gruppi di Azione Patriottica – Patriotic Action Groups) placed a box of dynamite near the hotel, destroying the central part of the building and a portion of the façade. The current appearance is thus partially due to renovations after that date.

On the main floor of the Grand Hotel Majestic già Baglioni, it is possible to admire a frescoed room, one of Bologna’s most valuable artistic and historical examples of civil construction. The so-called Camerino di Europa (the Little Room of Europa) was probably the first major commission entrusted to the brothers Agostino and Annibale Carracci. The two young Bolognese painters were assigned the task through the fortunate position of their father Antonio who, as the tailor of Count Filippo Fava, advocated the nobleman on his children’s behalf. They agreed to paint the room for a very low fee. High instead is the pictorial value of this "cycle," which involves only the upper part of the walls. Developed as a frieze, it is linked to stylistic models that Raphael and his circle of collaborators had recovered years before and revived in Rome In this room the story of Europa is condensed into four scenes (inspired by the second book of Ovid’s Metamorphoses), that illustrate a marvelous gift for cinematographic synthesis: 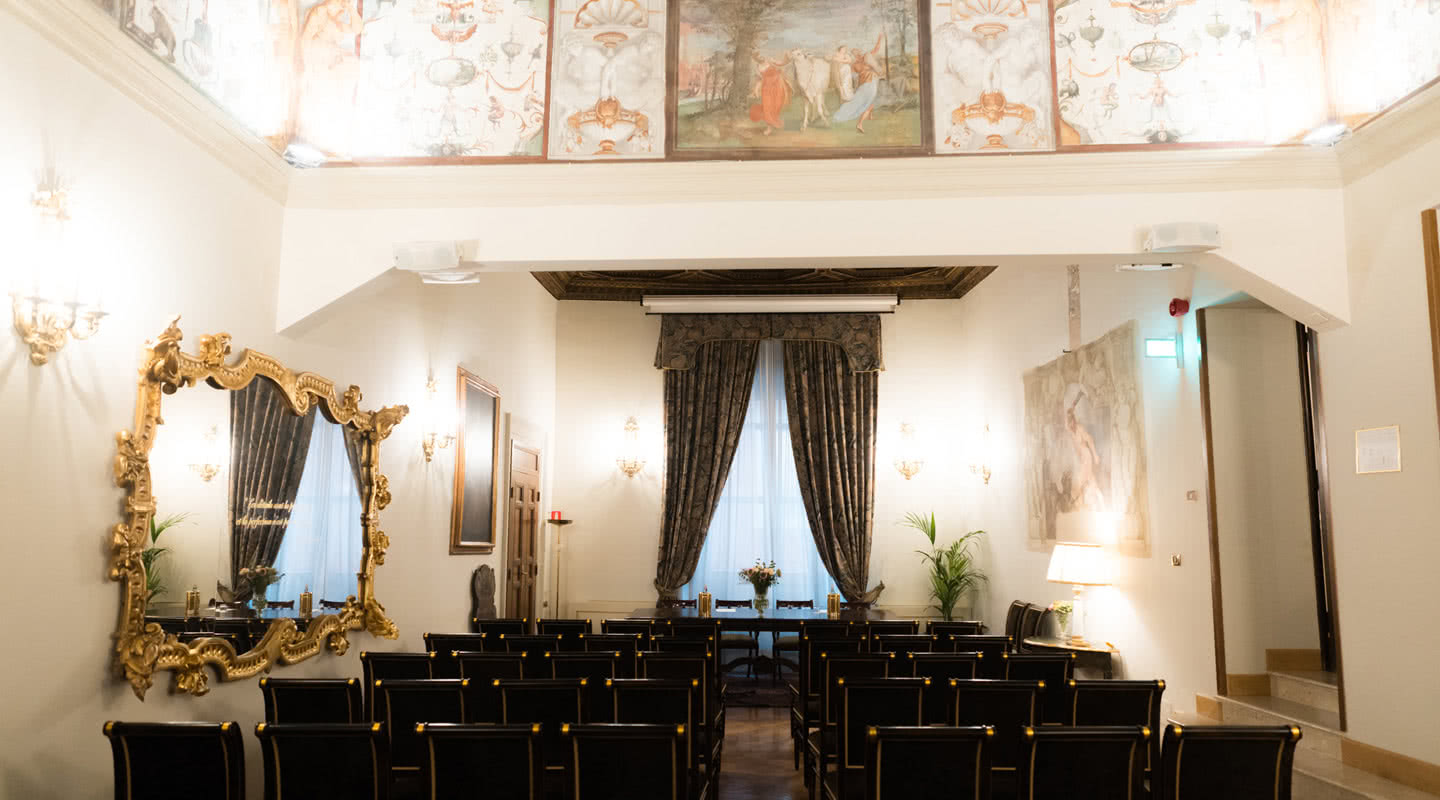 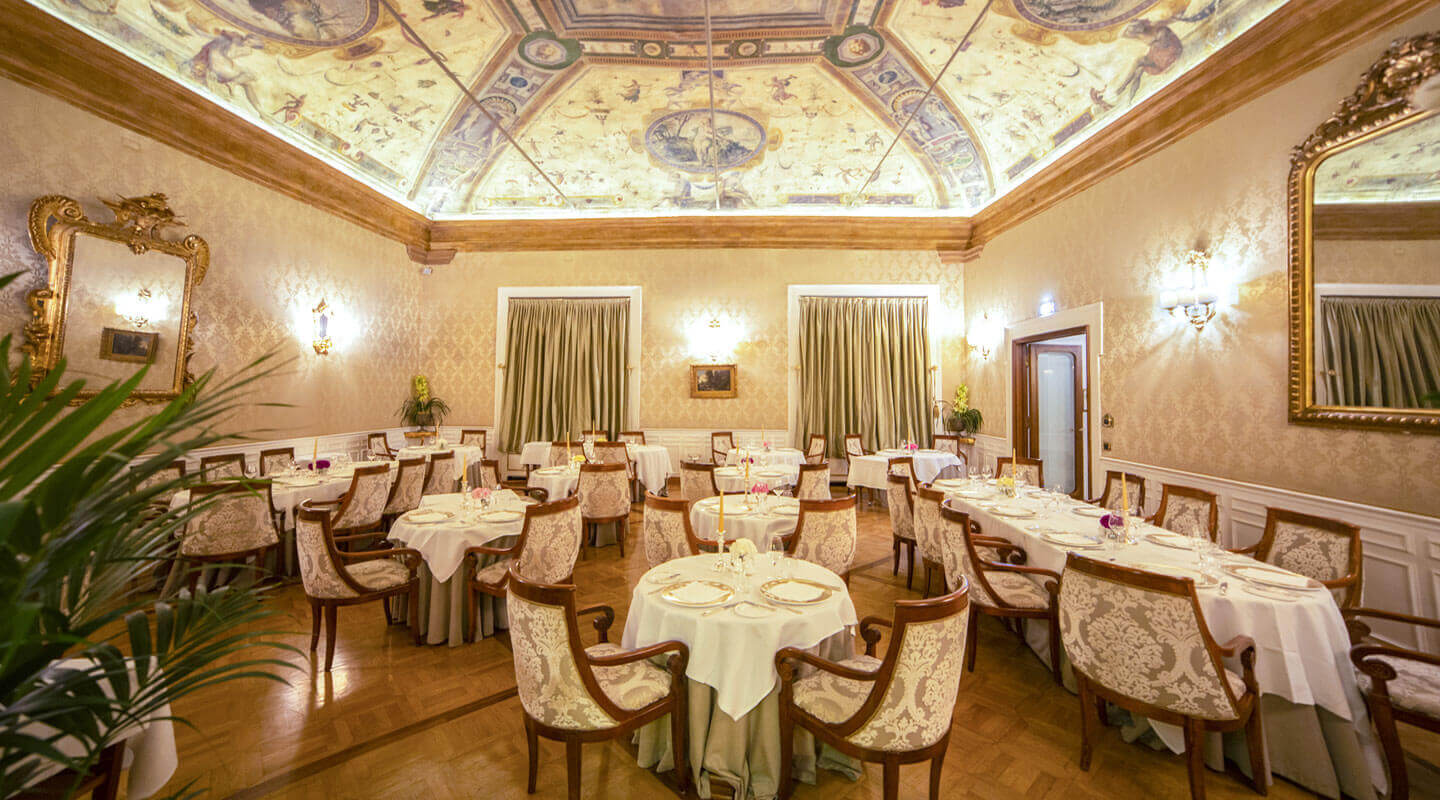 the young daughter of Phoenix and Perimede who, loved by Zeus, was abducted by the god transformed into a bull, and brought to the island of Crete. From their union Minos, the mythical king of the island, was born. The narrative is divided into the following four stages realized as “paintings with faux frames” (Malvasia): Jupiter turned into a bull, forces Europa to approach him; Jupiter makes Europa lead him; Europa rises on the back of the bull; the rape of Europa. Likewise, faux reliefs border the paintings and grotesque decorations complete the frieze

It is difficult to assign the authorship of this work with certainty, or of its individual parts, to one or the other of the Carracci brothers. In the course of time theories of criticism have outlined a wide range of possibilities. Among experts there are those who suggest an almost equal division of tasks between Annibale and Agostino. Others suggest a preponderance of Agostino’s hand.

The most believable thesis recognizes Annibale as the author of all four paintings representing the episodes in the rape of Europa and Agostino the executor of only the grotesque decorations. Although the originality and philological consistency of these decorations are one of its major attractions, the latter hypothesis would assign Annibale more importance than Agostino. Still other theories suggest the possibility of a partnership with their cousin Ludovico. However, art historians all seem to agree in assigning the painting of Europa mounting the bull to Annibale. Apart from attributions, the only certainty seems to be the date of execution of these works. The inscription with the date 1584 at the base of the frescoes depicting the Stories of Jason found in another hall of Palazzo Fava, which are believed to have been executed immediately after those of Europa, would conjecture the realization of the Camerino by 1583.

Of some interest are the frescoes in the restaurant of the hotel depicting the myth of Phaethon crashing after being struck by Zeus’ lightning bolt. They are framed by grotesque decorations on the old model. 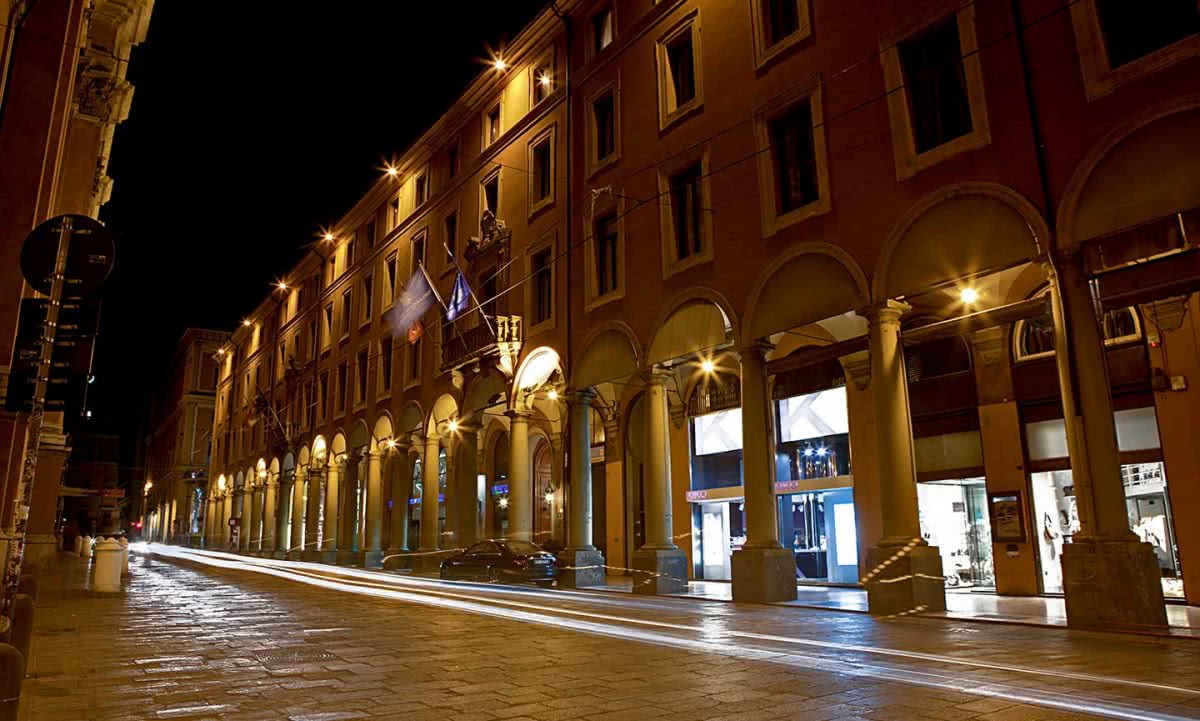 Here the problem of attribution is more complex and still open. Since it is thought that the decoration of this room belongs to a stage prior to the intervention of the Carracci, this would exclude painters such as Francesco Albani and Bartolomeo Cesi. They worked at Palazzo Fava until around 1598, later than the Carracci, focusing on the main floor rooms dedicated to the Aeneid. One possible author could have been a pupil of Lorenzo Sabbatini, a mannerist painter from Bologna who was a follower of Parmigianino and Vasari and able to work not only in Bologna, but also for the Medici in Florence and at the Vatican in Rome.

Finally, the large paintings placed in the bar area and on the first floor of the hotel deserve a mention; they are natural landscapes and views demonstrating eighteenth-century taste. Aristocratic mansions aimed to establish a connection, or rather continuity, between the interior of the building and the surrounding nature. In this case it is difficult to venture any attributive hypothesis: they remain as evidence of an appreciation and a relationship with the environment for which today we can only hope.