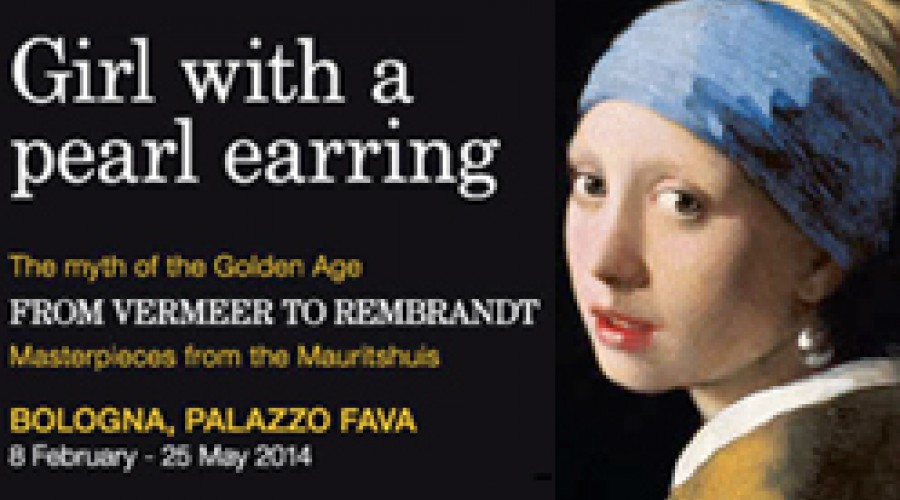 The myth of the Golden Age

From Vermeer to Rembrandt. Masterpieces from the Mauritshuis
Bologna, Palazzo Fava, 8th February – 25th May 2014

Don't miss the exclusive promotion to visit the exhibition

This exhibition has some remarkable and unique aspects. The opportunity to stage it arose following the temporary closure for restoration work and the construction of a new extension in the Mauritshuis, one of the world’s truly great museums, located in the Hague in the Netherlands. The Mauritshuis is a treasure trove of countless masterpieces that retell the Golden Age of 17th-century Dutch painting, mainly organized around the names of Vermeer and Rembrandt.
The closure of the glorious Dutch museum led its management to arrange a highly select world tour for a group of paintings, focused on the masterpiece of masterpieces, Johannes Vermeer’s Girl with the Pearl Earring. This painting is generally acknowledged to be the most celebrated and admired work after Mona Lisa.
Indeed there is no need even to mention the artist’s name, such is the fame of the painting. Following the 2012 exhibitions in Tokyo and Kobe, in Japan, and the 2013 shows in the United States (San Francisco, Atlanta and, lastly, New York), the only European showing, in early 2014, will be in Italy – at the Palazzo Fava, Bologna. After this last exhibition, the painting will return to the Netherlands in time for the reopening of the Mauritshuis in June 2014. And from there it will probably never move again. Accompanying the Vermeer there will be a host of other masterworks, by artists such as Rembrandt, Hals, Steen and Ter Borch as well as a second Vermeer. All the greatness of 17th-century Dutch art in a single exhibition staged in Bologna, Italy and promoted by Fondazione Carisbo, the Museo nella Città and Linea d’ombra, with Segafredo Zanetti as main sponsor.
11 Novembre 2013 ticket booking available
For information: +39 (0)422 429999- www.lineadombra.it